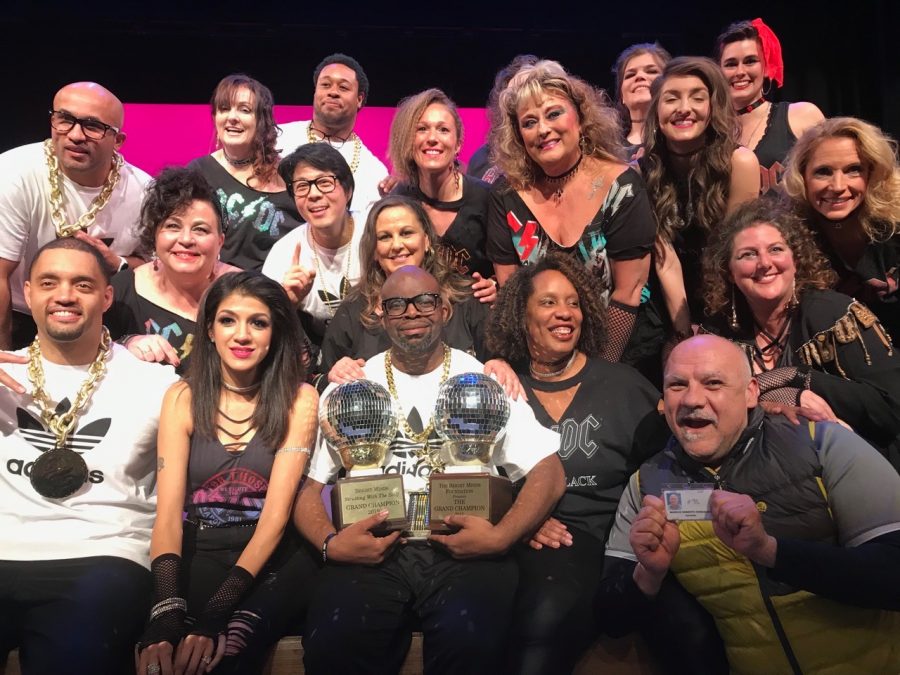 Bright Minds Struttin’ with the Staff

Bright Minds is a Howard County Foundation that brings educational opportunities to students and staff.  For the past two years, Bright Minds has sponsored a ‘dance off’ of many of the Howard County Public School Staff.  The Homewood Center is the two-time, undefeated champion and looking to three-peat.  This year’s theme is Broadway.

I had the opportunity to interview Jhandis Latta (team leader and choreographer) and two of the dancers, Wendi Pitts a social worker at the school and Lisa Jacob, a middle school teacher.  Here is what they had to say:

Question:  What is the toughest part of the dancing?

Latta: The toughest part of struttin’ is probably trying to make one person’s vision a reality through twenty other people. Every song, dance move, and position is always done by thinking about the other 20 people that are involved. The time that goes into choreographing the moves and cutting the music is a lot as well.

Pitts: For me, the toughest part is memorizing the steps at speed for some of the faster songs.  For example, one of the Broadway songs comes from Annie.  The steps on their own, are not difficult to do, and when there is no music, I can do them just fine.  When the music is playing and I have to do those same steps a twice the speed I learned them, I get all twisted and forget parts.

What is the most satisfying part of dancing?

Latta: The most fun is bringing the dance to life.  The practices that we have and people messing up just makes us laugh with one another and come together as one. There is not one person, myself included that doesn’t mess up at one point. We literally create something out of nothing and people are able to things that they thought that they couldn’t do. It’s just a fun time.

Jacob: Most satisfying-hmm…seeing all of our hard work reward us with a win; losing a little weight; creating new friendships and getting to know others in a less serious way. It’s really fun.

Pitts: The most satisfying part is seeing it all come together in the end.  Right now we are still figuring out finishing touches, we haven’t decided on costumes yet and there are lots of little details to be worked out, but the when we walk out on stage everything has come together perfectly, there is no more satisfying feeling in the world of dance.

Jacob: Is Latta a tough task master? Latta is really competitive. He’s not tough, but he expects us to show up and work hard. He wants all of us to want this as badly as he does. He’s very focused and definitely has a plan. He’s very passionate about strutting. He makes it fun, challenging and he’s so patient when strutters need a little extra help.

Pitts: Latta was an evil dictator in a past life.

Why do you think the group has been good for so many years?

Jacob:  This is only my second year doing this. I think that we (#homewoodfamily) are a unique and special group of people, who find just the right way to make things work, when others have given up. We come together when we need to. We are dedicated to what we do-and that means coming in at 6:30 am to practice, and then practicing again that same afternoon, after working with our students all day. We work hard, but still have fun. We laugh, sweat, yawn. We’re sore and tired. We are “so good” because that’s who we are. No other school starts planning and practicing as early as we do; no other school practices twice a day; no other team does what we do through the school day, and then gives more of ourselves after school; no other team has Latta’s drive and dedication. We are “so good” because we are Homewood.

Pitts: We have been so good mostly because Latta was an evil dictator in a past life.  Because of his leadership, we probably work harder than any other school for this event.  I doubt that anyone else has practices twice a day, or starts learning their routines as early as we get started.

Mr. Latta, do you feel pressure to ‘three-peat’?

Latta: I think that I always feel pressure. This year the theme was Broadway, which is out of my wheelhouse a little, so I felt pressure on coming up with something in this area. There is always the once you won, you definitely don’t want to lose.  Back to back is amazing, but to three-peat, oh man that would be beyond belief. I could see myself retiring after that. All the other schools are coming for us. They have told me so. Homewood is going to put on a show and hopefully bring back another trophy.

Thanks to the three of you for taking time out of your day.  Since this article has been written all public activities in the Howard County School System have been cancelled. We look forward to the prospect of seeing our strutters compete when school resumes.